A church dedicated to St Lawrence, the martyr, was first built in Kirby Sigston at the beginning of the 12th century. The Norman church consisted of a nave and chancel, both of which were enlarged in the 13th century. The original building can still be traced in the west front, in stonework in the south wall of the nave and in the windows in the south wall of the chancel and the priest’s door which can only be seen on the outer wall. The arcade between the nave and the north aisle is considerably earlier than the chancel and can be dated as c1190 by the waterleaf capitals of the arches.

In the chancel the piscina marks the site of an earlier altar. In the north wall a blocked arcade of two arches, the capitals decorated with dragons and leaves and the outer columns with two animals, perhaps hounds, once opened to a chantry. The chantry was dedicated to Our Lady and established in 1343 by John Sigston, then lord of the manor.

In the 1890s the church was restored by the distinguished architect Temple Moore.
A carved oak screen and rood beam were added as a memorial to the late rector, Thomas Atkinson.

On the west wall of the nave a modern pointed doorway leads to the Georgian tower added in the 19th century; above that is a 12th century window. The bells were recast and rehung in 1983.

The font is from 1662, with the date and the initials of the churchwardens inscribed upon its bowl.

In the north-east corner of the churchyard a tiny National School once stood. It was built about 1846 and catered for 35 children.

Today the parish church of Kirby Sigston stands in some isolation but in Mediaeval times a village was just half a mile to the south-east. The parish now includes the villages of Kirby Sigston, Sowerby under Cotcliffe, Winton, Stank and Hallikeld. The church is not normally open during the week but keys are available. Please call  01609 775245.

To find the church: leave Northallerton by Bullamoor Road and go to the junction with the road leading to Sowerby-under-Cotcliffe - a distance of approximately three miles from the town centre. Turn right and proceed in front of the Manor House, which is to your left, until you reach the end of its wall. Go through the gate on the left, then through the gate straight ahead, and you will find a track leading to the church. The church and the area around it are shown on this map. 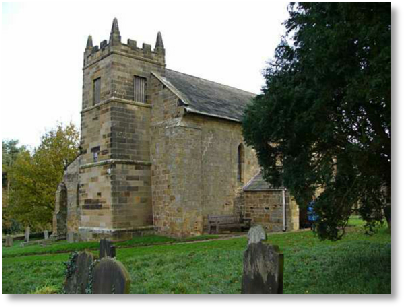