There has probably been a church on this site since the 7th century, but there is no documentary evidence of any building before the present one. The first building is likely to have been of wood and is said to have been founded by St Paulinus (d. 644). It was replaced by a stone building in the 9th century: fragments of this Saxon church have been unearthed at intervals since and are displayed inside.

The outside of the church presents a fairly uniform 15th century appearance in the “Perpendicular” style, but inside it is quite a different matter! The Norman origins are clear from the north aisle arcade (c.1120). The south aisle arcade was constructed around 70 years later; but already its pillars are taller and more slender and the arches have pointed tops. The transepts were added in the “Early English” style in the 13th century and a tower was built between them at the crossing. This collapsed in 1318, when Northallerton was sacked by the Scots, and was replaced by the present tower in 1420. Both aisles were also renewed and enlarged in the 15th century, but fortunately the 12th century arcades were retained. The chancel was completely rebuilt in 1885 in an imitation of the “Perpendicular” style.

The interior of the church was extensively refurbished in the late 19th century, when the chancel was rebuilt, and most of the furnishings and stained glass date from then. One exception is the font, which bears the date 1662 and is topped by an 18th century wooden canopy. In the 20th century a number of items from the workshop of Robert Thompson of Kilburn (the “Mouseman”) were introduced. The Victorian pews have been replaced with a modern, portable, design which allows more flexible use of the building for worship; and an extension to the north of the church houses a meeting room, office and toilets. So there is something from almost every century since the 9th in this church and we hope you will want to come and see it all for yourself!

Since the eighteenth century it has been believed that John Fisher, who later became Bishop of Rochester and was executed for his opposition to Henry VIII and canonised as a saint by the Roman Catholic church in 1935, was vicar of All Saints in 1491-94.  However, recent re-examination of the documentary sources suggests that this may have been a different Bishop John Fisher.

All Saints is at the northern end of Northallerton High Street (Map). All bus services to Northallerton stop directly outside and the railway station is approximately ½m. away. The church is normally open to visitors every day from 8.30am until 5:00 pm (dusk in winter). At other times it can be seen by appointment. A range of free leaflets about the building is available and a full history and guidebook is on sale. 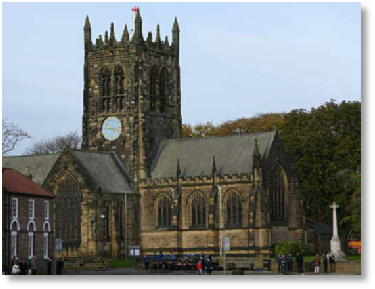 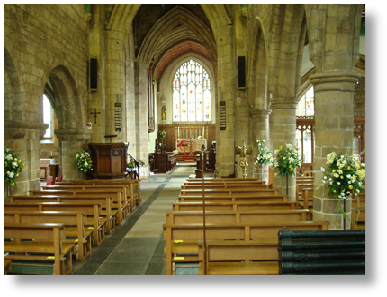