The church was consecrated in 1882 to serve the growing satellite village of Romanby to the southeast of Northallerton. It was designed by Charles Hodgson Fowler of Durham, a well-known Victorian church architect.

It consists of a nave without aisles and chancel in the “Perpendicular” style. There is an attractive slender cupola and spire above the chancel arch, housing a bell. The interior carved woodwork is by John Meynell of Northallerton.

In 2006-07 an extension, by Ronald Sims of York, was built at the west end to create a general purpose hall, kitchen and toilet. Ramped access to the building was also provided. These facilities were dedicated by the Bishop of Whitby on 30 May 2007, the 125th anniversary of the original consecration.

A service was the subject of the 'At Your Service' column in The Northern Echo and the article called St James ‘A Family-Friendly Church’.

In 2013 the roof of the church was completely replaced and the cupola and bell tower refurbished. Insulation was also added to the roof which should mean greater comfort for worshippers in winter.

The church is situated on the B1333 Ainderby Road, opposite the junction with Harewood Lane (Map).

It is five minutes’ walk from Northallerton railway station and a number of bus services from Northallerton stop in Harewood Lane. At present the church is not regularly open outside service times, but the interior can been seen by appointment. 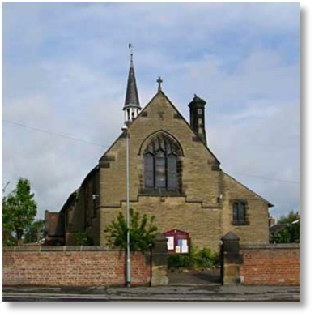